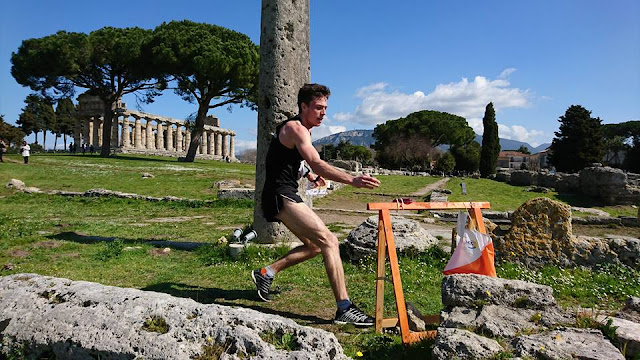 
The 13th edition of the MOC Mediterranean Open Championship Orienteering 2017 took place last weekend in the beautiful region of Campania, Italy. Organized by PWT Italy and AOK Agropoli Orienteering Klubb, the event kicked off in Agropoli, with a Night Sprint won by Tim Robertson (Fossum IF) and Helena Jansson (OK Ravinen) in the Elite classes. Robertson finished his course with the time of 14:14 and an eighteen-second advantage over Daniel Hubmann (Koovee), second placed. Jansson was the only athlete to break the fifteen-minute barrier, scoring 14:51 against 15:06 of Karolin Ohlsson (Järla Orientering), who finished second. The second stage brought the competitors to the UNESCO site of Paestum, to a mix of ancient Greek culture and great orienteering fun along temples, walls, walkways, stones, gates and houses. Yannick Michiels (TuMe) and Helena Jansson were the winners, but the stage had to be voided for technical reasons.

The decisive stage, a fast Middle Distance in Reggia di Caserta, took place in another UNESCO site, with the competition stretching to the ancient hunting seat of the King of Naples, the amazing Royal Palace with its enchanted English garden. After a great performance, Daniel Hubmann was able to annul the disadvantage to Robertson, registering 23:34 in the end of his course, against 24:56 from the new-zealander, fourth placed. Kris Jones (Lillomarka OL) was Hubmann's biggest challenger this time, finishing second with more 56 seconds than the winner. In the women's race, Sabine Hauswirth (Halden SK) achieved a good win with the time of 23:42, but the nineteen-second advantage over Helena Jansson, second placed, wasn't good enough to overthrow the Swedish from the first place in the overall standings.