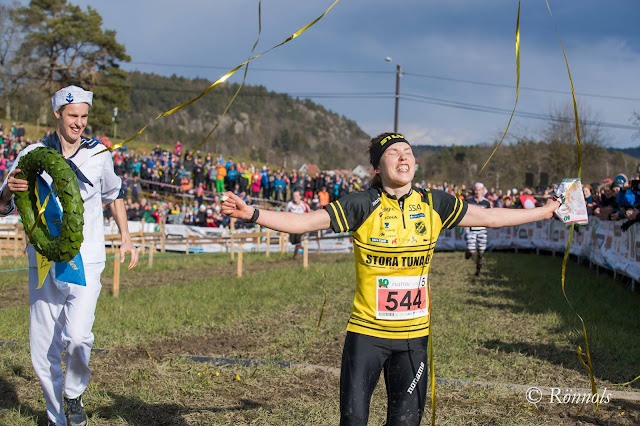 Exciting from the beginning and with a dramatic ending, so it was the 2017 10MILA's Women Relay, won by the Swedish team of Stora Tuna OK. It was the return of the Swedish club to the first place of the podium of this prestigious competition, nine years after the last great achievement and an unique moment of joy for Anna Mårsell, Magdalena Olsson, Julia Gross, Frida Sandberg and Tove Alexandersson.


313 teams lined up for the 10MILA 2017 Women Relay. After an excellent performance by Marianne Andersen, Kristiansand OK took the lead after the first leg with a 31-second advantage over Järla Orienteering. NTNUI followed in the third position, almost three minutes (!) after the first placed. The second leg was dominated by Halden SK, with Mari Fasting taking the lead, two seconds ahead of Kirsi Nurmi, from IFK Göteborg, and a twenty-second advantage over Emma Silvennoinen, from Paimion Rasti.

Although the longest, with 10.7 km, the third leg just came out shuffling the standings, since in the end were 13 the teams that stood in the lead, separated by only 12 seconds from each other. The 14th ranked, MS Parma, already had a six-minute disadvantage for the front group, which was led by Stora Tuna OK. In the fourth leg, the shortest out of the five, with only 4.5 km, Venla Harju got a good advance with his team of Tampereen Pyrintö, leaving for the decisive leg with a 1:40 advantage over IFK Göteborg and 2:56 over the IFK Lidingö SOK, respectively second and third placed.


Victory of IK Hakarpspojkarna in the Youth Relay

With a tremendous pressure on her, Saila Kinni was still able to keep Tampereen Pyrintö's leadership during the first two thirds of the last leg, over the distance of 8.3 km, but the final moments would be dramatic. Doing an incredible race, Tove Alexandersson was able to recover more than six minutes and take the Stora Tuna OK to the third place with just 500 meters to finish the race. Next to her was Judith Wyder (Göteborg-Majorna OK), a little further ahead Saila Kinni that was now the runner-up and ahead Natalia Gemperle (Alfta-Ösa OK), leading with a 30 second advantage. But the momentum of victory was on the side of Alexandersson and Wyder, who eventually benefited from a big mistake of Gemperle and imposed their class until the last meters. Stora Tuna OK won with a 2 second lead over Göteborg-Majorna OK and 7 seconds over the Tampereen Pyrintö. This was Stora Tuna OK's fourth win at the 10MILA's Women Relay after the triumphs in 1982, 1984 and 2008.

Posted by Joaquim Margarido at 12:15 am