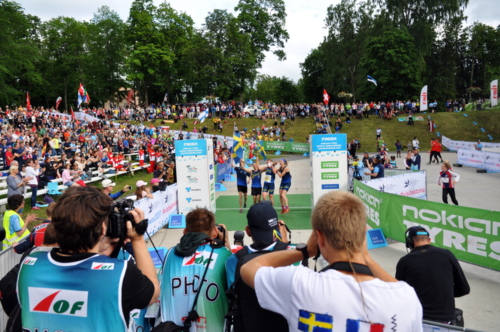 - We have been fighting in the top for a long time, but this is the first time we finished on top. I couldn´t have dreamed about a better start of the championships, says last leg runner Helena Jansson.

The sprint terrain was challenging with a mix of urban terrain and steep slopes. The deciding moment came on the third leg when Great Britain and Switzerland made big mistakes. Jonas Leandersson in the Swedish team kept calm and got a 40 second lead.

- I managed to keep focused but I was surprised at the big gap at the end, says Jonas Leandersson.

Helena Jansson made a good race without any mistakes and Sweden won with a margin of 29 seconds.

- I focused really hard on my technical performance and I am really happy with the gold, says Helena Jansson.

The reigning champions Denmark won the silver after a very strong finish from Maja Alm. Switzerland with Sabine Hauswirth on the final leg took the bronze.

Posted by Joaquim Margarido at 6:11 pm