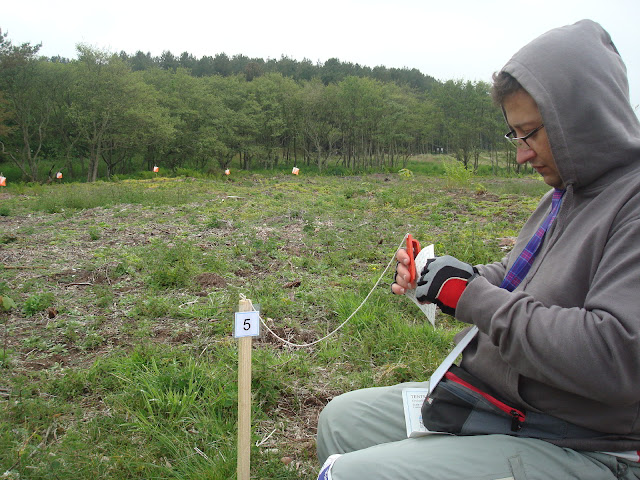 June 07. Model Event, a great opportunity to boost the morale after the discouraging results in the TempO World Trophy.


1. Model Event, a great opportunity to boost the morale after the discouraging results in the TempO World Trophy. " United Iberia, in fortune and adversity," would say my friend Roberto Munilla and I could not agree more with him. But, before the trip to the much sought Kinshaldy Picnic Park, an unpleasant grizzly day, but without rain. At least for now!

2. Roberto followed by car directly to the Model Event and his vacancy at the Minibus is occupied by Lyn West. She sits in front of the vehicle, between the driver and a young Japanese. I jump from my place and install myself next to the President of the British Orienteering Federation, after to evacuate the Japanese. Our conversation on the way to Tentsmuir will be recorded. For later transcription... and share!

3. Let's go then to the Model Event. Wind and sea as background. The course has 10 points, complemented by two timed controls. First of all, I confirm what Roberto already told me. Although they are good for Foot Orienteering, our compasses are not suitable for Trail Orienteering. They should have the scale graduated in millimetres. Later I will realize that a good basis on the map is important, also as the extent of the ruler. The larger, the more measured are the "sights" that are taken from them. And to use a loupe like Ivo Tilsjar does, perhaps is not a bad idea at all!

4. I assist Ricardo, helping him in the progression. Where he stops, I stop too. I help him moving from one side to another for him to make the best decision. In the meantime, I'm studying my own map and taking some photos of the points and one or another competitor. At the end of each section, we compare the answers. I explain to him my assurances, expose the reason for my doubts. We disagree on a good pair of them. I recognize I failed control three due to a poor reading of the signs. And had he done good decisions? At the end we will know who is right.

5. Us three - Roberto, Ricardo and I - sitting at the "table of judgments." All in all, I gave four right answers, Roberto six and Ricardo eight. Curiously, we hit all the control points in some very interesting times. Roberto says I am a "forger of diamonds", referring to Ricardo and expressing his admiration for practising this sport for three months only. Eight out of twelve, who knew? Great Ricardo. Thanks to his knowledge, intuition and, most of all, he didn't make it complicated. I am very proud of him, I'm very happy for him. I expect that tomorrow the surprise is even greater!

6. The afternoon is used to know the region a little. We drove straight to St. Andrews, in whose University, with nearly 600 years old, Prince William and his wife, Kate Middleton, graduated. Besides this phenomenon of popularity, the University of St. Andrews is among the top twenty in the world of Arts and Humanities. Besides the excellent quality of teaching and researching, it has an extremely stimulating academic environment and teachers - many of them true references - that interact and actively participate with the students.

7. A stroll through the centre of St. Andrews takes us to meet a city that moves on an axis between two avenues, whose width softens the buildings austerity. There is also the Cathedral with its wonderful St. Rule's Tower, the Castle, the sandy beaches and the golf courses. Yes, St. Andrews is the home of the Golf, with a first historical reference dating from 1552. Moreover, the Golf is everywhere, at the stores, in the church (where they sell three balls for a pound) and even in the cemetery.

8. It seems that many teams had the same idea as we did. We come across in the streets with the Czech and the Norwegian, we lunch at the restaurant next to the Polish. Restaurant where, incidentally, we ate very well and for a correct price. To join my steak, I had for company a very delicate and feminine wine, a very New World Shiraz & Cabernet Sauvignon. Roberto is still rolling his head as how I discovered that the wine was... Australian!

9. The return is made along the coast, stopping for short visits to Crail and Anstruther. The afternoon falls and the rain seems to increase its intensity. The forecast talks about storm in southwest England, and it's moving in our direction. The race tomorrow is another increased concern. We are still far from Dundee and the Trail-O Meeting is in twenty minutes. Roberto tries to drive a little faster, but the narrow road does not let him. It's really amazing how Portugal has extraordinary roads when compared with those here. But are not precisely all these excesses that we're paying now? And with interest!

10. We had dinner back at the table of the Danish. And again I gather from Søren Saxthorp a couple of important lessons. He tells me that his wife did the same course as we did, but with different descriptions of the controls. A course made easier thanks to the wiles of the description. How haven't I remember this before? I no longer need to worry about making a course to the Elite and another for beginners. The two courses may be just one, with the same number of points or not. In this case, I must only be careful to mark the number of each station with different colours: Blue for the Elite, yellow for the beginners. Thank you, Søren!

Posted by Joaquim Margarido at 1:18 pm