Jana Kostová: "It is more about attitude, heart" 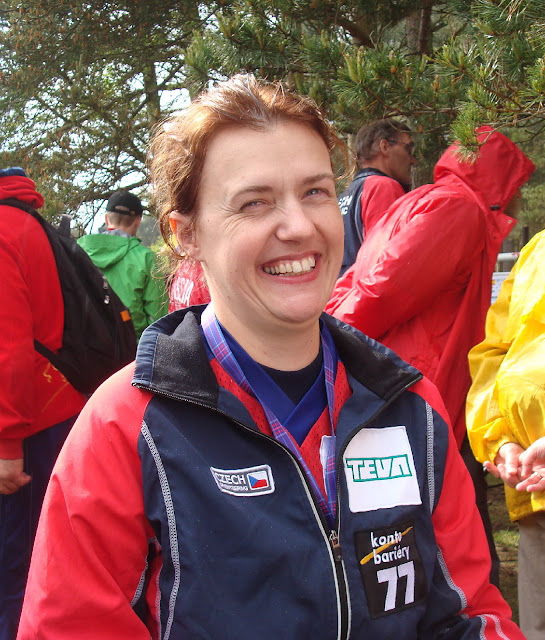 Jana Kostová is an athlete from Czech Republic. She is 37 years old, lives in Prague, is Assistant in a charity foundation and participated for the second time in the WTOC. You can see now what she has to say about herself and trail orienteering in general.


For how many years have you done Trail-Orienteering?

Jana Kostová (J. K.) – Let's say, more or less three years now. Intensively (laughs). I started doing Orienteering when I was child, five or six years old. Then, when I was twelve, I decided to play Volleyball instead, but when I got on a wheelchair, which was six years ago, I saw an opportunity to do Orienteering again and I took it as a chance. I had always missed it a little. So for me it was kind of a “return”.

What attracts you in Trail-Orienteering?

J. K. – It's an opportunity to get out and to interact with nature, in the forests, although today it was a little bit over the edge. For me it was really demanding. But otherwise it's a great opportunity to get outside, to spend some time in the nature. And it’s not time consuming - because actually in the Czech Republic we don't have trainings, so for me it means that I have to take the weekend off, for instance once a month, only. Which is perfect for me – I am otherwise busy with family, having three and half year old twins.

Where do you compete the most?

J. K. – I go to events mainly in the Czech Republic. Last year I went to France and to Sweden once and this year I only competed in the ETOC in Sweden and now the WTOC in Scotland.

How do you see the present moment of Orienteering in the Czech Republic?

J. K. – The competition is getting tougher and tougher, not only here but generally around the world. In the Czech Republic we have around 10-15 competitions per year, approximately, often trying to have two day events to make it more effective. It’s a really intensive experience. Course setters in the Czech Republic are getting better and better. Even during these last three years that I've been doing Trail-Orienteering I can see how much they all have improved.

And how about the number of competitors, is it improving too?

J. K. – Not really that much, I could say. There are people who could be really good at Trail-Orienteering (usually doing foot-o) but they're not really into it, unfortunately. Speaking about wheelchair guys, there are not that many that would see this sport as an opportunity and a challenge. They usually try to find something more physically demanding that involves more adrenaline. Still we have now around 15 people on wheelchairs who regularly attend orienteering competitions here. Then, there are few who can organise events here, and good events, but in my opinion we would need a few more to make it a good mixture of different styles, locations... and to enable those course setters to compete, too. The number of course setters here is almost the same during the last two-three years. Recently, two or three new names showed up, who could potentially join this little group but we will see.

What would you say to people to persuade them to come to Trail-Orienteering?

J. K. – That's a though one! (laughs) I really don't know, in Trail-Orienteering it is more about attitudes, heart. I think you can't really persuade someone just like that with a few words. I think you need to have it somewhere inside of you, you need to like solving problems and going out, you need to be kind of perfectionist… I can't see right now anything that would persuade someone who never saw it, who never tried it before. From the first sight it can seem boring, but it is not!

In these World Championships, what was the best and the worst for you?

J. K. – I generally liked both days, the courses, the controls and everything was really challenging. The worst thing was the second day's course – speaking about the path condition because for me (and my assistant...) it was really demanding, I had to work hard to get from one point to another, and that was one of the reasons why I thought about it a hundred times before I returned on the path to double-check some issues from a different angle. You know, my assistant was really helpful but I didn't want to make him work harder than it was necessary. For me it was one of the worst experiences in this matter, I really tried to avoid returning if possible ,which, on the other hand, put me to think ahead. But then you start thinking about the advantages walking people in the same category may have…

J. K. – Trail-O, definitely. I don't have that much experience in TempO, I am not that good at it, so for me TempO is like a Model Event, it's like training for Championships.

J. K. - I hope I will have an opportunity to go there. Portugal was always on my list of countries to visit. Unfortunately I didn’t have time by now to go, so 2014 is my time! Benfica Lisbon and Lisbon itself rings the bell and I liked a lot a book by Erich Maria Remarque, “The Night in Lisbon”, so you should do the ETOC in Lisbon… (laughs) Otherwise, I’m afraid I don’t know much about Portugal (apart from general knowledge like location, capital etc.) or your orienteering but I will be happy to learn. From events such as ETOC, in general, I expect precision in every aspect.

For how much longer are we going to see you in Trail-Orienteering?

J. K. – For many years, I hope! I would like to do it more and more. I don't have much time, but for me it's a really great thing to do, I like it. And there are still goals to reach, space to be better…

Posted by Joaquim Margarido at 12:20 am