Martin Fredholm: "The perfect sport for me" 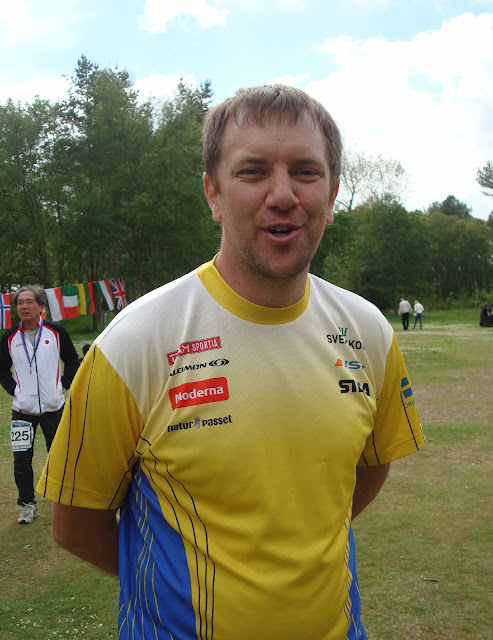 He is one of the few athletes that has competed in all the nine WTOC editions. Started in 1998, World Champion in 2006 and second place in 2004 and 2008. He is 35 years old now, lives in Uppsala and he's still a student at KTH Royal institute of Technology. There you are, in brief, some biographic notes of our today's guest, Martin Fredholm.


What does Trail Orienteering mean to you?

Martin Fredholm (M. F.) – To me it is an exciting type of Orienteering. The map reading and the terrain interpretation are really a perfect test. And you don’t have to run, because I have always been good at Orienteering but never been good at running, so this is the perfect sport for me.

How did you start?

M. F. – I started in Foot Orienteering when I was young. But when I got older and the courses got longer and since I don’t like running too much, I lost interest and stopped with Foot Orienteering. Many years later my mother helped organizing a TrailO-competition and thought that this would be a perfect sport for me. I tried it, my first competition was a night competition, I liked it and I have competed ever since.

You belong to a family of trail orienteers, your father and mother are very involved in this sport and their excellent work is recognized everywhere. How do you see this?

M. F. – Me and many others do appreciate all the work they have done and do for the sport. But I don’t get much influence from them regarding the actual orienteering because almost all of the time I’m better than them. But it’s nice to compete in equal terms; you don’t have to care with ages and gender, or ability in movement. This is the beauty of this sport. Alias, in Sweden and the other Nordic countries we only have one class. We don’t divide it in Paralympic and Open class because we feel that the fundaments of trail orienteering are that everybody should be able to compete on equal terms. So, it should just be one single class. This is supported very strongly by the disabled competitors in our countries. We do have more than one class in competitions in the Nordic countries, but the classes have different skill levels and have nothing to do with physical ability (Paralympic and Open). In Sweden we have Elite-, A-, B- and C-classes. One major difference between the classes is that zero-controls are only allowed in the Elite- and A-class and must be very clear in the A-class.

Please, tell me something about the development of TrailO in Sweden

M. F. – For the last ten years we have had between 35-45 competitions each year. About five of these are night-competitions and about five are TempO-competitions. Currently there are about 160 competitors on the ranking list, fourty of them competed more than twenty times last year. To get on the ranking list you have to participate in at least 2 competitions. During the O-Ringen, the big 5-day competition in Sweden, on the rest day the foot-orienteers have the opportunity to do a TrailO course. This has been very successful and appreciated and more than one hundred foot-orienteers have tested TrailO each year. We have been in contact with handicap organizations and promoted TrailO but it has been proven difficult to recruit new competitors, since there are such a wide variety of other sports available.

What skills do you think that are essential in order to be a good trail orienteer?

M. F. – You need to be very good at reading a map and trying to match it with the terrain. These are the fundaments of trail orienteering. Looking at the terrain and creating your own picture of it, you have to try to compare it with the map and, hopefully, they are coincident. If they are not, then you have to try to figure out why it happens, how the mapmaker has seen this terrain. There is no secret, that’s it.

Can I ask you what was the best and the worst of the World Trail Orienteering Championships 2012?

M. F. – The best part was that this terrain is very suitable for TrailO. Unfortunately, I don’t think they have used it in a correct way. They could have used it much better, making orienteering problems instead of placing all flags on the same feature and just letting the center of the circle decide which flag is correct instead of using the terrain, using map reading skills, that’s what I think TrailO is. We had this kind of controls in the Nordic countries 10-15 years ago but now we have what we call orienteering controls. An example of an orienteering control: If the control is a spur, the alternative flags are placed on spurs nearby or on formations that look like spurs but are unmapped.

And what about your performance?

M. F. – I must be happy with my performance on the second day, but on the first day I didn’t do as well as I hoped to do.

M. F. – They are a little different but both have their merits. I’m not going to choose one of them, I like them both.

Is trail orienteering moving in the right direction?

We’ll see Portugal organizing the European Trail Orienteering Championships in 2014. What do you expect of this event?

M. F. – I hope it will have good and challenging competitions. It will be nice to visit a new country for me. Since Portugal is quite new to TrailO it is important that they gain as much knowledge as possible. The best way to do this is to participate in TrailO-competitions. My advice is that the planner(s) and controller(s) visit for example Sweden or Finland and take part in TrailO-competitions there.

For how long are we going to see you doing trail orienteering?

M. F. – I’ll continue doing it, that’s for sure. Hopefully I will make the selection to our team, so I will compete on the next years in World Championships and European Championships. But this is not for sure, because we have many good trail orienteers in Sweden and it might be hard to qualify for the team.

Posted by Joaquim Margarido at 6:19 am