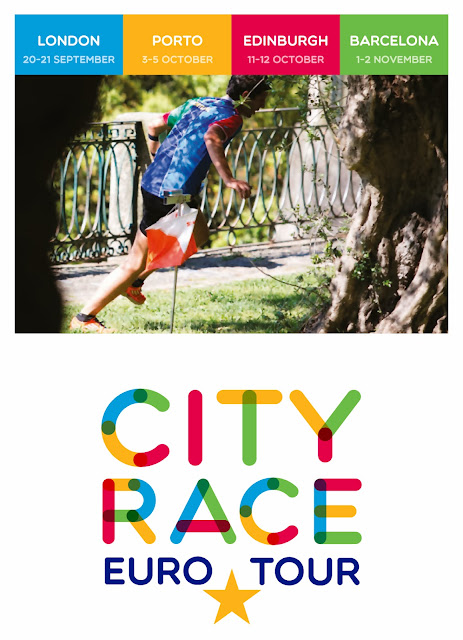 Between September 20th and November 2nd 2014, Orienteering will be in focus in four major European cities. The City Race Euro Tour is an initiative that brings together the efforts and interests of London, Porto, Edinburgh and Barcelona, hand in hand with sports tourism and with the aim of attracting new practitioners as well as the elite.

The popular London City Race is the venue chosen for the inaugural presentation of the City Race Euro Tour. Starting in the capital of the United Kingdom, on September 20th and 21st 2014, the event will go through Portugal (Porto, 3rd to 5th October) and Scotland (Edinburgh, October 11th and 12th), ending in Spain in Barcelona on 1st and 2nd November. “Think hard, run fast, feel good” stands as the motto for these four major orienteering events in four major European cities.

To learn more, I met with Fernando Costa, the Portuguese orienteer responsible for the organization of the Porto City Race. He said that “there are still details to be decided, small refinements to be worked out in what will be the final regulations for the City Race Euro Tour”, but he stated that this series of races will involve “the completion of long routes in the city; they will not be traditional sprint events.” According to Costa, “this type of race will attract more participants who love orienteering and also enjoy some of the most beautiful cities in Europe in terms of tourism”, adding that “tour packages will be available to all participants with affordable prices, and with quality programmes at each event”. More information will be published on the tour website: http://cityracetour.org/.

Stepping back about a year, Fernando Costa recalls that “the idea of creating the Euro City Race Tour was the result of a partnership established in 2012 between the organizations of the London City Race and Porto City Race”. The results of combining the social and sporting interests indeed proved promising, and then to start to extend the invitation to other organizations took only a brief moment: “We contacted through e mail those responsible for various events, and both the ‘Race The Castles’ and the ‘International Trophy of the City of Barcelona’ responded positively straight away. Others have shown interest in joining the Euro City Race Tour, but due to various reasons ended up postponing the decision to 2015”, Costa says.

Respecting the different existing organizational structures of each race, the event provides for the creation of a “ranking with various competition classes”, although there is still some uncertainty on this matter. The overriding common factor is the desire of the organisers to go ahead with the project, looking to “promote sports tourism, create trails tailored to ordinary citizens who enjoy walking and attract new participants to orienteering through better media coverage”, Fernando Costa concludes.

[See the original article at http://www.orienteering.org/edocker/inside-orienteering/2013-5/InsideOrient%205_13.pdf. Published with permission from the International Orienteering Federation]