Jonas Vytautas Gvildys: "You can easily twist an ankle and then you'll see what the forest is" 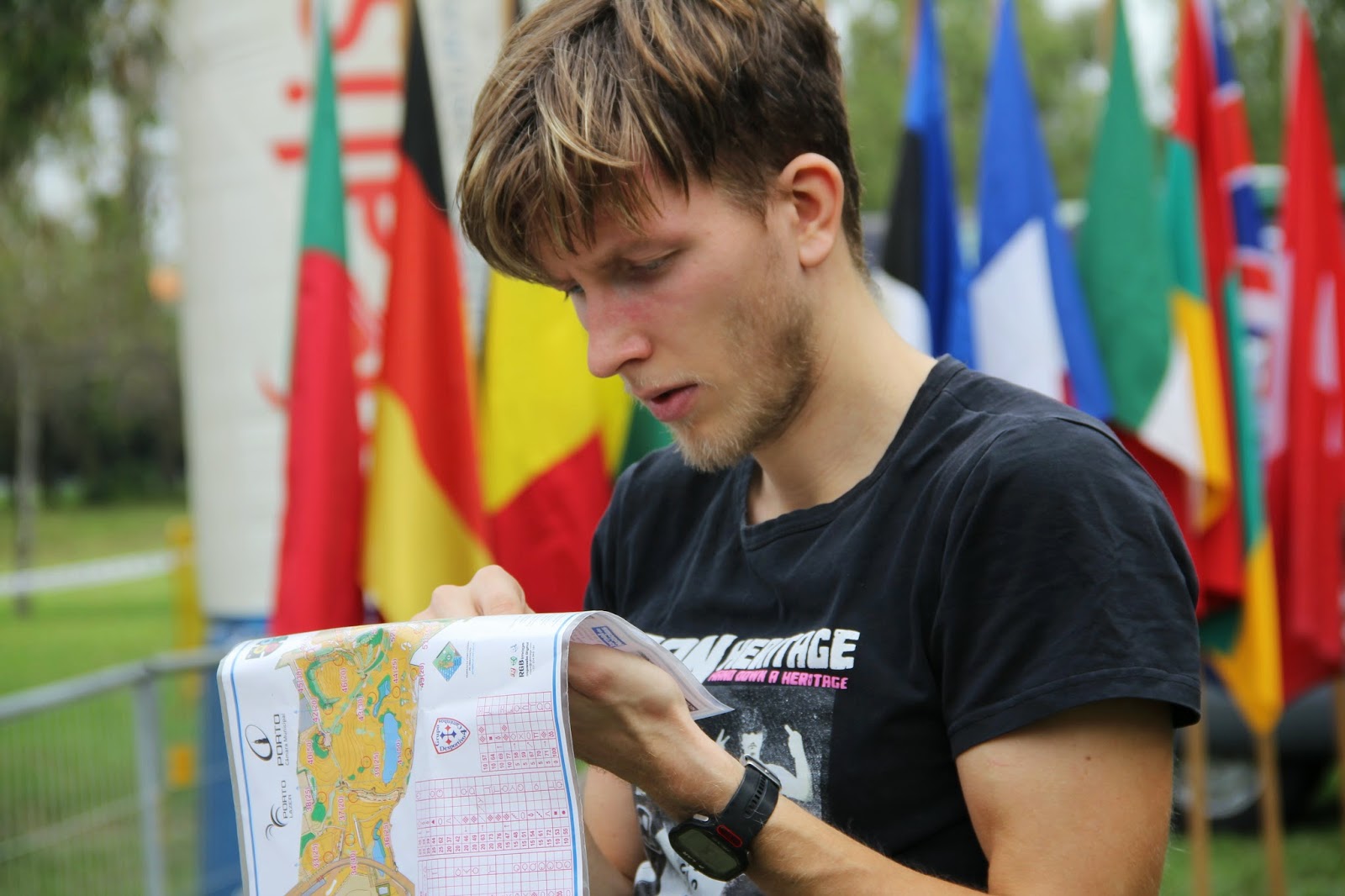 Now that the season is about to end, we could follow in Portugal a nice event in a very beautiful place. The Porto City Race 2014 called to the second most important city in the country 750 participants, among which we found the Lithuanian Jonas Vytautas Gvildys. Here he leaves some impressions about himself, the current season and the near future.

Why did you choose Portugal in this time of the season?

In the meanwhile, you've grown as an orienteer and your own projects got some specific and important goals, I believe. That's why we can see you, right now, in the 10th place of the IOF's World Sprint Ranking. What are your feelings about the current season?

J. V. G. - Overall, the season was good. The World Championships are always the most important competitions and, this time, in Italy, we could face very different terrains from what we have in Lithuania. We don't have the same possibilities – the money to travel - as other countries and we couldn't prepare the Championships the way that we would like. We had a training camp in Italy before the World Championships, of course, but I think it wasn't enough for the forest distances.

Even so, we could see you achieving a nice result in the Sprint final...

J. V. G. - The Sprint is quite good for me, and my goals are to achieve always the best results. A sprint race is equal everywhere, it's almost the same...

J. V. G. - Yes, it's easier and it's not so prestigious. To win the World title in Sprint it's not the same as to win the Middle or the Long Distance title. But yes, in Venice I got my best result of the season, despite I'm not very happy with it because I know that I could do better. There's a lot of luck included in the Sprint distance. Everybody can reach the top three and everybody can complain in the end of the course about too many mistakes, “if I could subtract twenty seconds to my time I could be the winner”, if, if... It was the same for me. I was a little disappointed, even thinking about it right now, but the 9th place was my best result and it was the best moment of the season.

Another great moment was the 5th place in the Middle Distance of the World Championships 2011, in France. Was it the best moment of your career until now?

J. V. G. - Yes, you could say so. I had, of course, better races without mistakes, local races in my home country, but this was a good race in a very tough competition. After that, I had some injuries, mostly in 2013, and I couldn't train at 100%. That's why I'm not higher at the moment, you have to keep working several years without traumas to achieve the best results. I believe that I would be higher in the future, I hope so (laughs).

You've talked about your best moment of the season, I would like to know what was your worst moment?

J. V. G. - Speaking about health, the worst moment is the present moment, right now. I had an operation three weeks ago, I couldn't train and I had to rest for sixteen days. I started to move again with little sessions of jogging, very slowly, without expectations, and I'm recovering.

But you're second placed in the night sprint...

J. V. G. - That was quite surprising. I felt terrible during all the course, I didn't push at all. As I ran slowly, it wasn't very difficult to get the right options, but it was a very demanding course. Too much stairs (laughs)... Physically it was tough but I liked it a lot, the atmosphere, this beautiful city! It's my first time here, I didn't know Porto – I landed here a couple of times but always to go somewhere in the south – but it's beautiful, indeed.

J. V. G. - Portugal is perfect to prepare the season. It's really good in the winter because you don't have snow here and we can run in technical terrains. You also have many quite tough terrains. I really hope to return here next winter for the Portugal O' Meeting. I'll do anything to make it happen.

At the beginning of our Interview, you said that you decided to come to Portugal because of your younger sister. How do you follow Tekle's career?

J. V. G. - She is quite good. If she is determined and if she pursuits her dreams, everything can happen. You know, you have to work quite hard. It's not that easy, you don't start training today and achieve something important tomorrow. It demands a lot of time and hard work.

How is it, to be an orienteer in Lithuania?

J. V. G. - The main sport in Lithuania is the Basketball, nobody cares about the other sports. We can say that 90% of the population is Basketball addicted. But we can't complain. We try to have some media attention, specially during the Lithuanian Championships or other important competitions. The times are not that bad, but it's not easy to find someone able to organize competitions. I hope that things could change in the future.

Now that you're about to return to your country, was it a nice experience, the three days of Porto City Race 2014?

J. V. G. - Yes, for sure. Especially the last course, it's nice that I could run faster, but actually throughout the course I wasn't feeling quite okay. I had a lot of rest, I didn't train and I can feel it right now. All the course I was fighting, trying to do my best, but it was tough. It wasn't a really tricky course and in some places you could run very fast. It wasn't too much hilly but I could feel every climb (laughs). It was a nice end of the season.

Talking about the future, Estonia in 2017 and Latvia in 2018 will receive the World Championships and I believe that your major goals are there. Am I right?

J. V. G. - Yes, you're probably right. At that time I'll be 29 years old and that's like the perfect age in this kind of sports. I think that I could be really good there because it's basically the same terrain that we have in Lithuania, I can prepare the competition quite well and I don't have to travel a lot. I think these are going to be nice competitions and I wish for the best results.

So, let's cross the fingers and don't get injured until than (!)...

J. V. G. - It's the most important thing for every orienteer, no injuries. You can easily twist an ankle and then you'll see what the forest is. This is not the asphalt.

Would you like to make a wish for the next season?

J. V. G. - I wish that Orienteering becomes more popular. I'll try to do my best in the World Championships, at Inverness, and I wish no traumas. 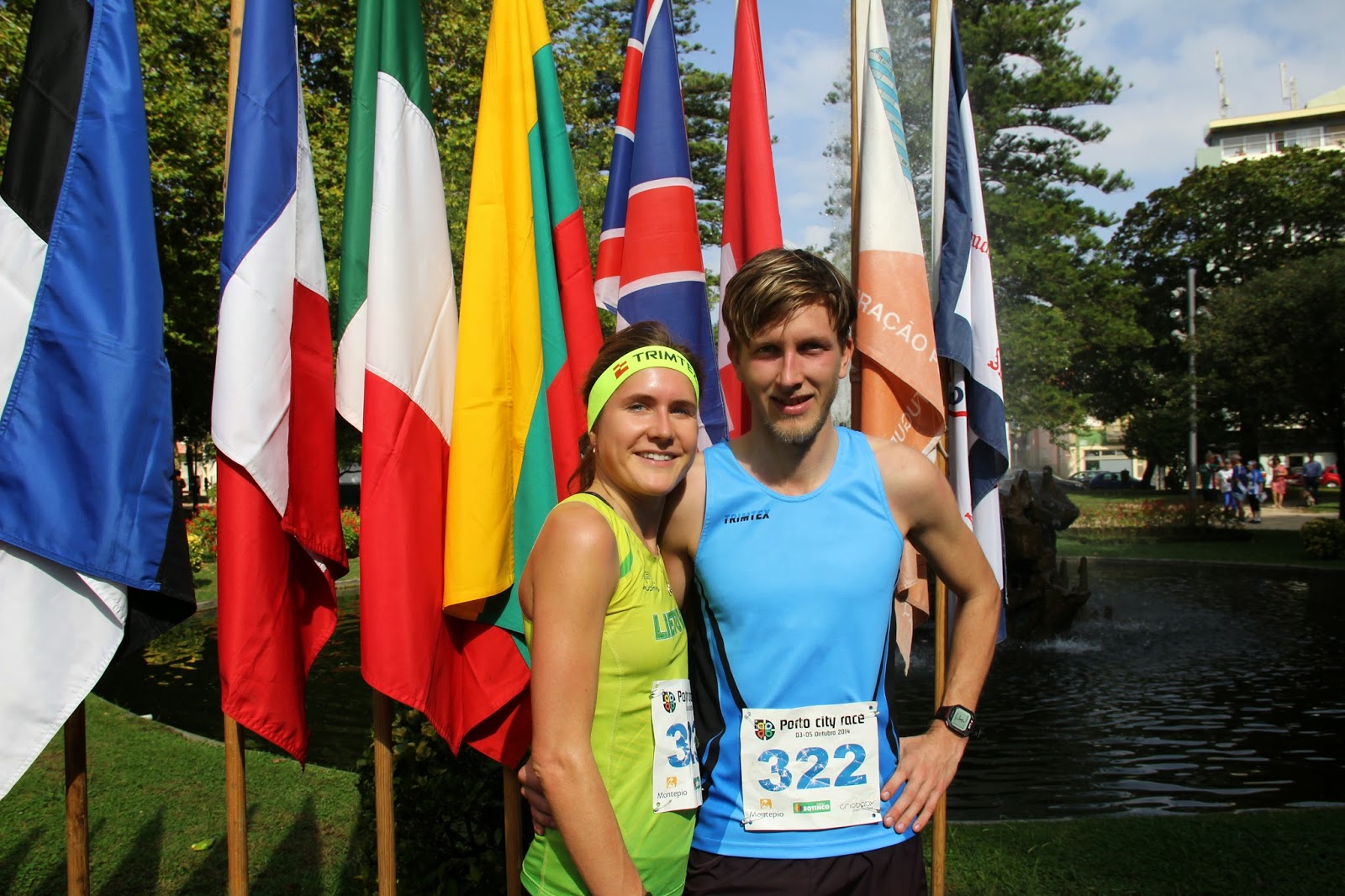 Confirming their favouritism, Jonas Vytautas Gvildys and Tekle Emilija Gvildyte were the winners of the Euro City Race, the final stage of Porto City Race's third edition. Counting for the City Race Euro Tour's ranking, the event had the participation of 750 athletes from 12 countries.

They came from the Lithuanian city of Kaunas and were the big winners of the Euro City Race, the queen race of the Port City Race 2014. At Foz Velha, an amazing tangle of streets that converge to the beautiful “meeting point” where the Douro River embraces the sea, the brothers Jonas Vytautas Gvildys and Tekle Emilija Gvildyte were the fastest, winning with huge merit the right to rise to the highest place of the respective podiums. “It was quite nice that I could run faster, but I felt that the things aren't still okay due too much days of rest; I missed a lot of trainings and I can feel it right now”, Jonas Vytautas Gvildys (OK Medeina) said. Credited with a time of 45:45 for the 8.0 km of his race, the Lithuanian added: “I was fighting all the course, trying to do my best, but it was tough”. Winner in the Women class, Tekle Emilija Gvildyte (OK Medeina) spent 43:02 to 5.7 km and she also showed satisfaction in the end: “I decided to come to Portugal because I like Sprints, I've never been in Porto and it's nice to be with my brother”, were her first words. And she wasn't disappointed: “I really enjoyed the city, this fantastic weather and the quality of the races”, she said. Soon, the return to Portugal? The answer of the two brothers is fast and clear: “Yes, for sure!”

This edition of the Porto City Race started with the Porto City Race by Night, a night Sprint full of excitement and energy that took place in the Historical Centre of Porto, World Heritage classified by the UNESCO. In a very demanding map, from a physical standpoint, the Portuguese João Mega Figueiredo (CN Alvito) and Tekle Gvildyte were the winners. The vast and beautiful green spaces of Porto City Park hosted the second stage of the Porto City Race 2014, having in the Relay its main attraction. Formed by Sergio Duarte, Rodrigo Magalhães and João Novo, the Portuguese team of .COM was the winner of the Men's Relay, over the Amigos da Montanha team by nearly two minutes apart. Greater was the advantage of the British team of SLOW - Helen Gardner, Esther Bonmati and Tekle Gvildyte – wining by almost twenty-two minutes over the Portuguese team of Ori-Estarreja. The offer of this wonderful morning included also a Score race, whose challenge of 1000 points to a timeout of 90 minutes was accomplished by 26 of the 150 participants. Bruno André (Individual) and the Italian Mara Pegoretti (AD Trento Orienteering) were the big winners. Counting for the City Race Euo Tour's ranking – joining the city races of London, Edinburgh and Barcelona -, the Porto City Race 2014 was organized by the Grupo Desportivo dos Quatro Caminhos, Municipality of Porto and Portuguese Orienteering Federation, calling this year to the “Invicta” city an amount of 750 participants from 12 countries.