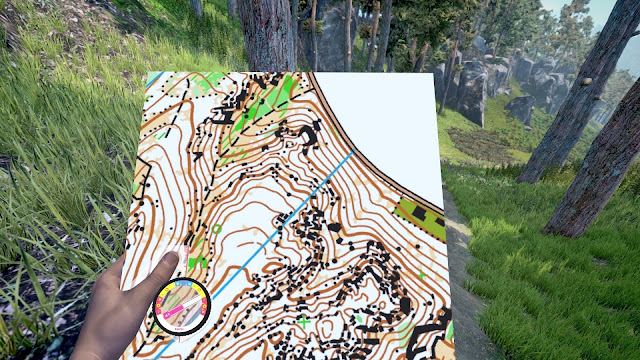 A trivial game? A training tool? An open door to the Orienteering World? Virtual-O is here and discover it will be the next challenge for each of us. Its creator, Peter Furucz, told to the Portuguese Orienteering Blog about a project that is both simulator and game, dream and passion.

Orienteering Canada shared WorldofO.com's post and talks about “a new orienteering game on the way”. Is Virtual-O just a game?

Peter Furucz (P. F.) - Yes and no. It will be both simulator and game. I have two different goals: I want to offer a training tool for elite orienteers and, at the same time, I would like to open orienteering to newcomers. So Virtual-O needs the best from both worlds. That’s why it will have a concept of game levels (Beginner, Normal, Elite), based on game speed, basically. The Elite level will be that top speed from fastest map in Catching Features. The Normal level will be for mortals like me. The Beginner level is self-explaining and it will provide special care for people outside of orienteering. So some good tutorial, such as some good introduction to map, compass and few navigation concepts, will be need. Then, I want to support map assistants or even some new ideas [https://virtualo.org/virtual-o-map-assistants/].

How did you get the idea?

P. F. - I wanted to create games from the first moment I was learning programming. I’m from an orienteering family, so when I was thinking about some indie game project, it was natural to create something that I know thoroughly. I knew orienteering, people from orienteering and what I wanted from simulator. And it’s much easier to create something that you know and you want it too… Still, I’ve tried a similar concept on developing some plugin for training software.

Comparing Virtual-O with Catching Features, a well-known game within the orienteering community, what are the main differences?

P. F. - Better graphics, which is natural considering the age of Catching Features. Then I’ve been trying to learn from Catching Features’ weaknesses, some design concepts of converter game, etc. I hope that big difference is that I’m working with the community. I’ve been communicating everything on Facebook forum. My research, mine ideas, also my doubts. So people are able to shape Virtual-O. In the meanwhile, new features are emerging like Kocbach’s map handling. Other features, like running model and compass physics, will be better to.

Still I’m trying, at least, maintain “compatible” handling of Virtual-O with Catching Features. So people that know Catching Features will feel at home in Virtual-O. I hope that real life changer will be that special care for newcomers to orienteering (map assistants, future concept of map handling with mouse gestures and more?). And I’m pretty sure that LIDAR based terrains are a real revolution for the orienteering simulator.

Following your work progressing via Facebook, on the group Virtual-O Early Access, we could feel a lot of passion on it but also lots of fun. Would you like to describe, since the beginning, the most important steps of all process?

P. F. - In fact this is my second try of creating an orienteering simulator. At first try I was building my own graphics engine, creating an OCAD converter, etc. I have ended it after some time, concluding that to create your own engine wasn’t a good decision. And my second - and last (laughs) - try was using the Unity engine (I have used some parts from first try). I’m using C# for scripting and it’s really cool, it’s pure joy just to work on Virtual-O. The game engines’ development has progressed so much. I don’t know how to describe it. But it simply excites me to apply the latest technology in programming and game development. That’s Virtual-O’s base soul. I’m basically creating it for myself, trying to improving it with the community. And if it could be something bigger or even have commercial success, then it would mean that I could dedicate 100% of my time to something that fulfills me.

How important was the feedback you received from group members? Were there some persons deserving a special word for their ideas and support?

P. F. - I don’t like the idea of choosing someone in particular, as so many people helped me to make Virtual-O better. And the community is really incredible. People take it really seriously; they are fighting for their feature etc. It’s really cool. But I simply must mention Jan Kocbach. Without his support and accurate feedback, Virtual-O would be a different project and simply worse. Also, Øystein Jaren Samuelsen. He has, literally, saved the Greenlight campaign.

Looking now to the final product, how proud you feel about your work?

P. F. – Humm!... I must say that it’s not the final product, yet. A long journey is still ahead. It will start with the Early Access (I hope that it will be on Steam). I would like to conclude the first phase of single player Virtual-O with some, for example, five base maps complete. Then, if people will ask for more and there will be enough interest from players, the work on multiplayer and public or some “hybrid” OCAD converter will start. Now, the converter is living inside of the game engine as it was much easier to start with it there.

I don’t have much time to be proud of Virtual-O, but today I’m very proud, because the community is really fighting for Virtual-O. Virtual-O current rank in Steam Greenlight is 43rd in competition of 2072 games. That’s really incredible for such a specific game. And it’s still climbing up…

You’ve mentioned Virtual-O Steam Greenlight campaign before. Can you explain what is it and what are your expectations from the Orienteering community?

P. F. - Steam is a big digital distribution platform for games and software. It has more than 125 million active users worldwide. It’s, simply, a system where users of Steam choose their favorite projects. And Steam will choose games that will be greenlight / distributed, based on users’ votes, quality of project, etc. It looks like now it’s a time, when a relatively small count of “Yes” votes is enough to get Greenlight (probably 1500+ votes means relative good chance). I think it could be, practically, a life changer for Virtual-O and for orienteering itself, too. It’s a way how to get orienteering to the masses. The success will give us a chance to introduce orienteering to whole world. Another important thing is that Steam is a proved digital distribution platform. So, instantly, with Virtual-O distributed there, we get system for downloading, automatic updating of game, licensing system, achievements model, taxes, etc. Madly complex things would be solved instantly. And that will give me more time for development of Virtual-O itself and a better user experience for you.

Last, but not least, who are you, Peter?

P. F. - I’m 32 years old, born and living in Bratislava, Slovakia. I have family, wife, one son and a second son on the way. I was doing orienteering on some competitive level when I was 15-18 years old. It was nothing big, a few medals from Slovak Championships. Okay, exactly three, I know it because my 2 years old son is often playing with them (laughs). But I’ve been always better in theory of training and map technique… Currently, I’m working as a Siebel consultant/developer so I’m simply fulfilling my dreams and ambitions with Virtual-O.

To know more, please visit Virtual-O's webpage at https://virtualo.org/. And don't forget to left your “Yes” on the Virtual-O Steam Greenlight campaign, at http://steamcommunity.com/sharedfiles/filedetails/?id=604035651.