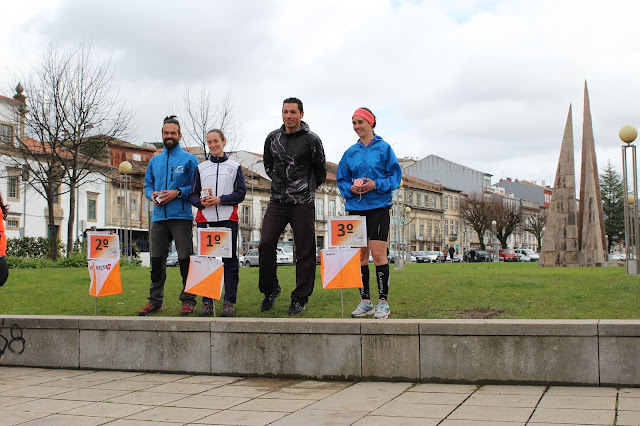 1. Known as the “Archbishops' City”, Braga hosted the second stage of the Portugal City Race 2016. Included in the Historic Centers National Day's program, the event was organized by the Clube de Orientação do Minho, Municipality of Braga and the Portuguese Orienteering Federation, registering two hundred participantes, from which 130 in the competition classes. As happened in Barcelos, in the Portugal City Race's opening stage, the Spanish Maikel Rodrigues (AROMON) won the Men Seniors class, covering the 12,600 meters of his course in 57:11. Ricardo Figueroa, from the same club, spent more 4:11 than the winner and reached the second position, while the third place went to Jorge Marques (GD4C), with a time of 1:02:27. In the Women Seniors class, the winner of the Portugal City Race in 2015, Carolina Delgado (GD4C) returned to the top of the podium, spending 44:54 to the 8400 meters of her course. Beatriz Moreira (CPOC) and Daniela Macedo (Individual) occupied the immediate positions with over 1:41 minutes and 4:59, respectively, to the winner. Complete results and further information at http://www.pontocom.pt/bragacityrace.

2. 82 participants in the TempO competition, 39 in the PreO Elite class and 34 in the Standard class took part in the Jan Kjellström International Festival of Orienteering this year. “The competition was intense and the results very close”, says John Kewley, adding some details: “The TempO at Leeds University, which had 5 stations with 4 tasks at each, was won by Ian Ditchfield (MV) with a cumulative time including penalties of 283.5 seconds. Tom Dobra (UBOC) in second place had a score just 4 seconds more - both Ian and Tom had 4 controls wrong. Third and fourth-placed Nick Barrable (SYO) and Saku Asikainen, Finland, had only 3 wrong but were slower, Nick scoring 315 seconds and Saku only just behind on 316.5. Best junior was Matthew Leitch (SO) with 364.5 (8 wrong). The best on the PreO Elite at Ampleforth Abbey had 18 correct out of 21, and were separated on the timed controls. Here Peter Huzan (SLOW) was quickest, completing the two tasks in 10.5 seconds. Iain Phillips (LEI) was just behind with 12.5 seconds and Anne Straube (OD) was third fastest with 14 seconds. The best Junior, Anna Harris (DEE), also had 18 correct and a time of 20.5 seconds, so 4th overall - a very creditable performance. Best Paralympic was John Crosby (NATO), 15 points + 16 seconds.” You may see the full results and some really interesting comments by Peter Roberts, the course planner, at http://www.thejk.org.uk/jk2016/index.php?pg=291.

3. Looking forward the next World Orienteering Championships, many of the best orienteers in the world were present in Strömstad for the first real test in relevant terrain. “Although the very top of the result lists was Scandinavian, both French, Swiss and Canadian (!) runners were close to the top of the results list”, Jan Kocbach says on World of O [HERE]. Saturday’s Middle Distance was a close fight between two of the top runners the last years, Olav Lundanes and Thierry Gueorgiou. Lundanes won 33 seconds ahead of Gueorgiou with Eskil Kinneberg in 3rd at 0:55. As for the Women Elite, Helena Jansson (winner), Tove Alexandersson (6th) and Judith Wyder (2nd) were the ones with highest speed. None of them had a perfect technical race, but Jansson’s race was the best technically, leading to victory 31 seconds ahead of Wyder with Saila Kinni in the 3rd place at 0:45. Kinneberg showed this weekend the same great shape as last spring, winning on Sunday’s Long Distance. The Norwegian won 34 seconds ahead of Gustav Bergman, with Gueorgiou being 3rd at 1:45. In addition to winning Saturday’s middle, Jansson was also on top on Sunday’s long distance. The biggest surprise of the day was however the Canadian Emily Kemp in second place with 1:13 minutes more than the winner. Heidi Østlid Bagstevold was 3rd at 4:03.

4. The MTBO Commission has launched a database to collect data on injuries that happened on MTBO competitions. The objective is to collect the information related to the accident for the benefit of understanding risks associated with MTBO competitions, and to improve safety as much as reasonable. The Commission will periodically review the learnings and advise both teams and organisers on safety related considerations. “Please report noteworthy injuries from events starting from 2016, but do not hesitate to include any significant injuries from earlier years”, the Commission asks. Personal data will not be published or shared. The link to the form is http://tinyurl.com/zzacyek. It will be also available from the MTBO Commission's website [HERE].

Email ThisBlogThis!Share to TwitterShare to FacebookShare to Pinterest
Labels: Foot-O, MTB-O, Portugal City Race, TrailO, Two or three things I know about it...